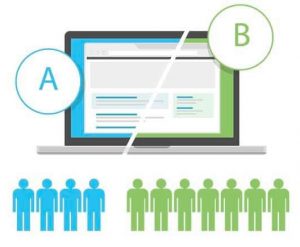 What is A/B testing? What is split testing?

A/B testing – or split testing – is the practice of splitting up traffic into two different groups, and observing which performs better. You would typically test “Group A” and “Group B” against each other, hence the name “A/B testing”.

As an example, let’s say you believe that showing a green button instead of a red button will result in more leads.

A/B testings lets you easily run a test, whereby 50% of users see a red button and 50% see a green button.

Your A/B testing tool will count the conversions for each group and tell you which performed best. This allows you to implement changes with confidence, rather than just guessing which variant will perform.

But online forms are often neglected. By changing the number of fields, the order of fields and the phrasing of key elements like buttons and questions, you can see significant increases in conversions.

Our A/B testing for forms feature will let you change all of these elements and see results from within your Growform account.

When running form A/B tests, we recommend considering mainly experiments such as:

How to A/B test your form

For the moment, the best way to A/B test your form is to use the tools built into your landing page builder.

In the future, we’re looking to build out the A/B testing functionality, so you will be able to A/B test your forms from your Growform dashboard.

It all starts here...